This Opportunity Makers interview features Anda Gansca, Co-founder and CEO of Knotch as she connects with Vineet Mehra, Global Chief Marketing Officer and Chief Customer Officer at Walgreens Boots Alliance. Vineet shares his perspective on many topics regarding the immigrant experience, including adapting to American culture, gaining personal freedom, and his advice to others hoping to make it in America. 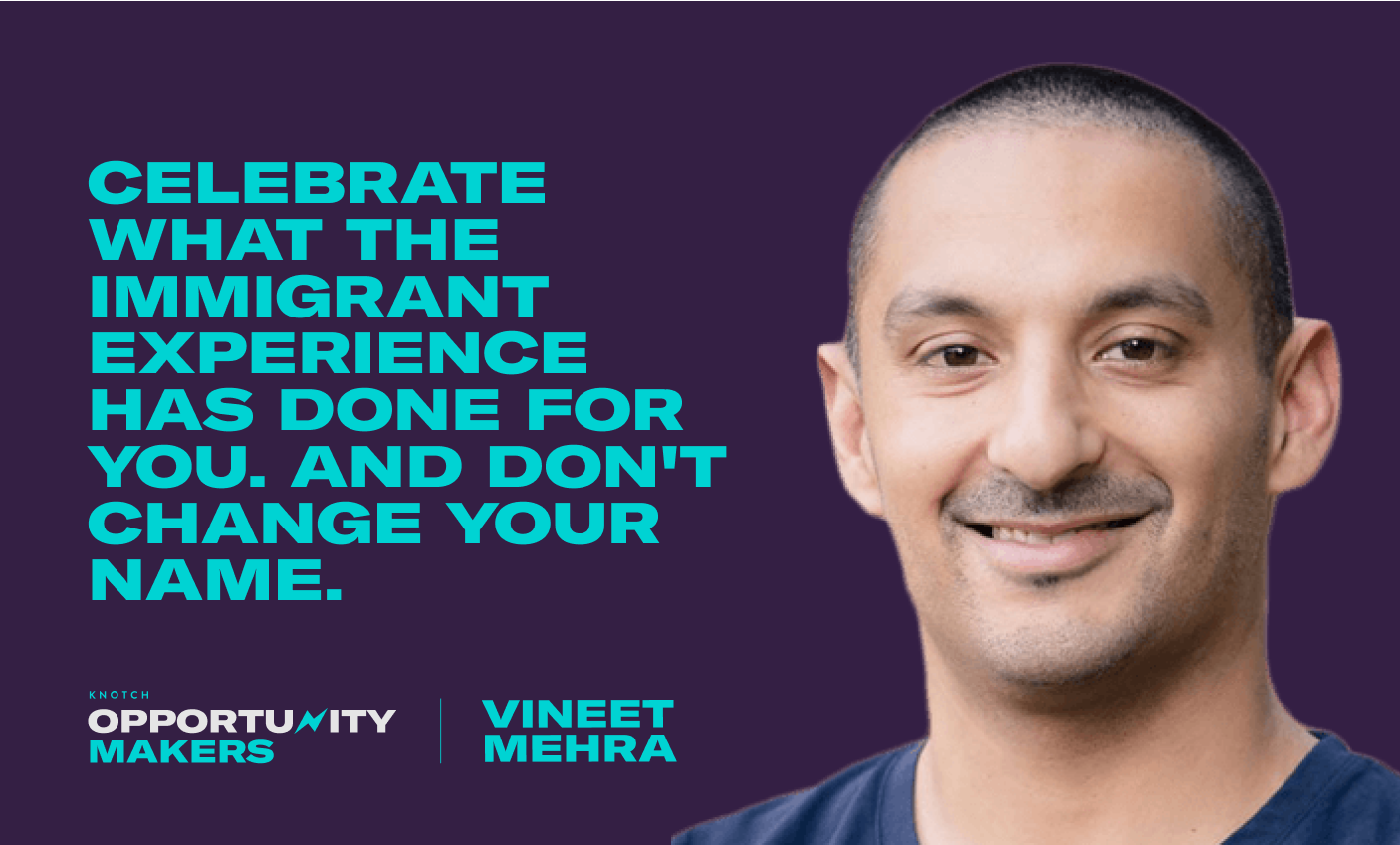 Vineet Mehra: I was born in New Delhi, and I still speak Hindi fluently. My parents wanted a life for me different from their life in India, so they made a hard decision to move to Canada. I have deep respect for my family for doing that. ‍

AG: Looking back at your parents' decision, you’re now this extremely successful executive at one of the biggest companies in the U.S. How crazy, right?‍

VM: Well, from my parents' perspective and being a first generation Indian, I'm not a doctor or an engineer, so I definitely haven’t hit the mark. I even had a music degree in university. But I know they're proud of my work ethic, because growing up I saw my parents fighting for what they have, and they passed that fight onto me.‍

AG: What is it about immigrant parents wanting their kids to be doctors and engineers?

VM: Trust me, a marketer is nowhere on that list. When I was first starting out in my career, I asked P&G to send me on an international assignment, and they sent me to Mumbai in India. In India, I quickly realized that there's a billion people there. To filter out who can actually make it, you need a degree. Then you need another degree, and then you even need another degree. It's a funnel that weeds out folks, which isn’t always fair. That’s because potential is equally distributed, whereas opportunity is not. Those that have opportunity in many cases are privileged to have more space to pursue education, among other privileges.

I realized that with a billion people in India, there's only one way you cut through: education. This is enabled by great performance in school, which ultimately leads to better things.

I also realized that immigrant parents leave their homes, time freezes. They still think of their countries as they were when they left. ‍

AG: Did time freeze for you when you moved from Canada? Do you go back and are surprised that things are different there?‍

VM: I go back and forth between Canada and India often. One thing I discovered was the contrast I saw. When I went to Mumbai, I saw that that place was happening, which isn’t what my parents told me India was like.‍

AG: In terms of your identity, do you consider yourself American, Canadian, or Indian? All of the above?‍

AG: What were some of the biggest challenges you had in adapting?‍

VM: I lived in two worlds growing up. I had to figure out a way to navigate my Indian home with Indian values and then fit into the local culture outside my home. In classic Indian culture, all eyes were on me. I had to break the cultural mold on essentially everything.

My younger brother is a doctor, so he's the “real deal,” with a very different fight. I married a non-Indian woman which I'm very thankful for, but it was definitely a journey.

Essentially, every milestone was a battle, though I was simply just trying to do things that my friends were doing. That was the story of my life. ‍

AG: How have these challenges you’ve faced as an immigrant helped you professionally?‍

VM: My wife and I are adaptable. I've lived all over the world, working with different brands in different countries. I credit that adaptability to the dual life I lived when I was a kid.

I'm also very much guided by my own north. I didn't become a doctor, because I was strong-willed about what I love doing. Growing up, I also tried to fit in on my own terms. I wasn't trying to change who I was.

Having to be the first in an immigrant family to pioneer every basic thing, like having a girlfriend for example, it forces you to march to the beat of your own drum. If you let everyone judge you for not fitting in, inside and outside the home, you have to instead have a north that guides you. I also credit that to who I am today, and I just keep going. ‍

AG: What gave you the courage to assert yourself and gain personal freedom? ‍

VM: I don't think there's a playbook, other than watching my mom and dad find their own north, in a country where no one knew them.

I followed their example, not their advice. Ultimately, it's that example that’s served me well, and I'm very thankful for my family for that. ‍

AG: What advice do you have for immigrants to “make it” in the US?‍

VM: Celebrate what the immigrant experience has done for you. And don't change your name. The quicker you get to the place of owning all that you are, the quicker you can start leveraging that to your advantage.

Second, bring your culture into your community. I'll never forget when we moved to a new town here in Chicago, and invited parents at my son's school to our Diwali party. Eighty to ninety people showed up! I believe a vast majority of people do want to celebrate differences and culture, but I guess I'm an optimist there. I think celebrating culture can help you connect with others, and gain appreciation for what makes us different.

Third, celebrate your parents and the decisions they made, because you can lose sight of that sometimes. That gratitude is what gives you perspective.