Knotch CEO Anda Gansca connects with Raja Rajamannar, Chief Marketing & Communications Officer and President, Healthcare Business at Mastercard in the latest interview in Knotch’s Opportunity Makers series. Raja talks about many aspects of his experience as an immigrant, including his journey to joining Mastercard, the importance of respecting other cultures, and the similarities people have with others around the world. 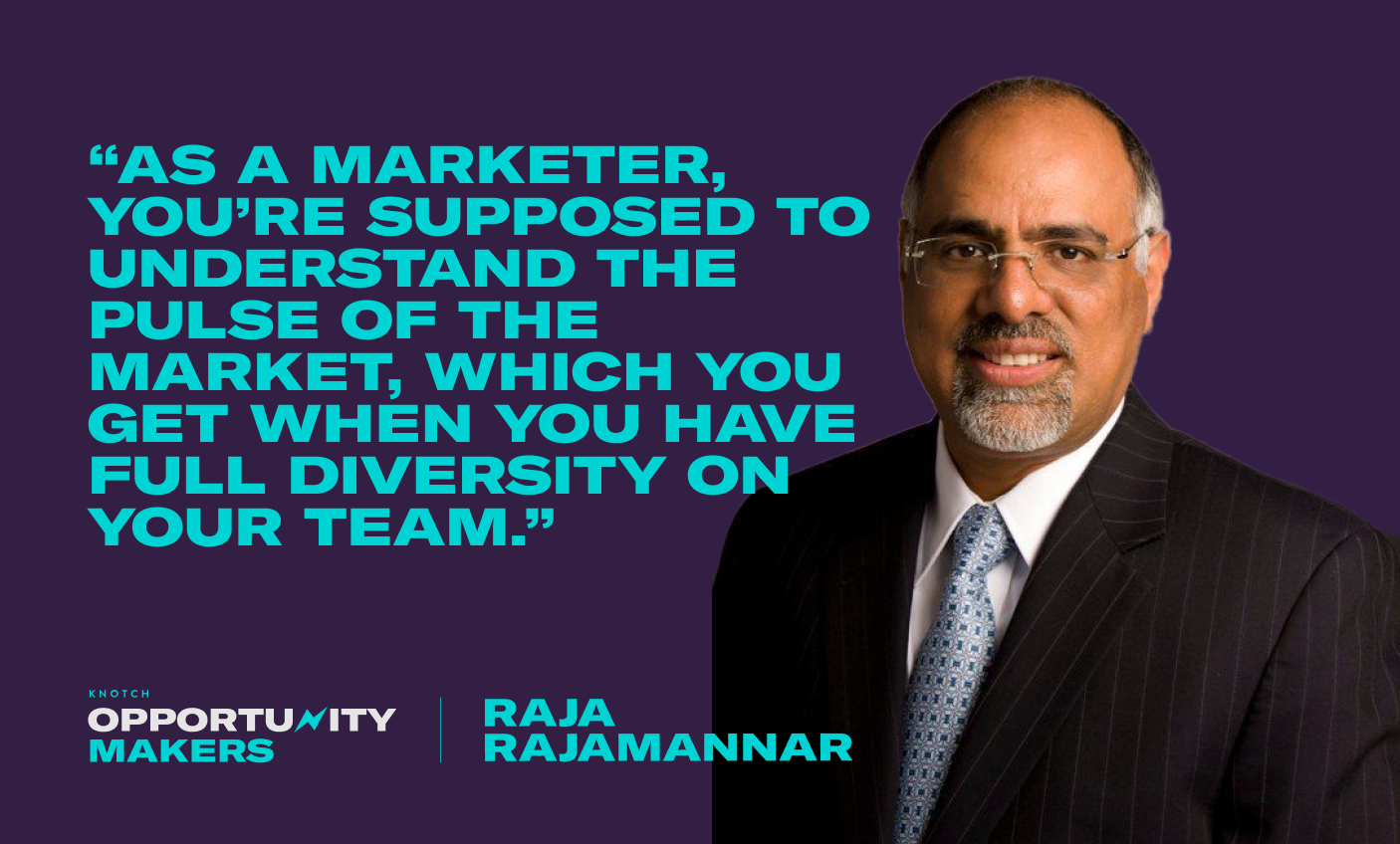 Anda Gansca: Can you walk us through how you got to the US and why it was important for you to come here?

Raja Rajamannar: I'm from India, and was fortunate to get a solid education there. I then had my first international employment opportunity to join Citibank in Dubai. From there I started to gain a global mindset, and over the course of 15 years I moved from Dubai to London and finally to the US. I’d always aspired to come to America because it was a land of opportunity and meritocracy, with a fantastic quality of life.

RR: I would say a vast majority are immigrants. And companies started seeing opportunities to take this knowledge, technology and everything else from this country and bring it to other areas, and then conquer those markets as well.

What’s interesting is that if you are in a developed market like the US, intuitively you don't understand the behaviors or mindsets of a common man or a woman in a country like India, or someplace at the lowest rung of the socioeconomic ladder. But if you come from that background, you can compliment your experience with the one from this country. It can make you truly well-rounded.

MasterCard is also a global company. We’ve got an incredible team that brings a cross-pollination of ideas, coming together to be truly global. ‍

AG: Do you think there's a difference between the way that immigrants realize their lack of a safety net when they come to the US from developing countries vs. developed ones? ‍

RR: On my team, I have people hailing from more developed countries in Europe, as well as people that come from a country like India, or the Far East. There’s a different appreciation and a different perspective that they use to look at the world, and they’re both valuable.

Another key fact is that the fastest growing markets are the developing ones. So as a company with global aspirations, unless you're tapped into those developing markets, you won’t have a successful global platform. You have to bring in people from those backgrounds and who can give you that valuable market perspective. The challenges that a person in a developing market faces are very difficult for those from a developed market to comprehend. Instead, the world needs a beautiful mixture of both of these talents with multiple perspectives. ‍

AG: Do you think there will come a time when you'll want to go back to India due to the growth there?‍

RR: I have decided to stay and call America my home. I’ve raised my kids in this country, and they’d find themselves completely out of place in India. Plus I love it here! It's been a fantastic opportunity for me.

I’d also like to point out the stereotypes that people have about how a marketer looks and behaves. They have to be very sophisticated, very trendy, a socialite. I'm a total antithesis to every one of these. It's a privilege to be the CMO, Chief Marketing and Communications Officer for a company like MasterCard. They never went with what I looked like on the outside, but rather my work ethic, my creativity, my leadership. And that’s what matters. I haven't taken away the job of any local person out here. I competed - I hope I’ve earned it.

So when you talk about contributions to society, it’s important to note that immigrants aren’t parasites. We’ve been very fortunate and very privileged to have the opportunities we’ve had. It’s now our turn to support those that are coming into our country - we are one “Priceless Planet.” We can’t tell people they don’t belong here, because it’s our planet. We’re one tiny speck of a planet that all these differences aren’t warranted, and we’re spending our energy on the wrong things.‍

AG: Companies are creating all sorts of diversity efforts to drive diversity in their teams. However, nowhere in these quotas or in these trainings does anyone factor immigrants into the equation. Why do you think that is and what should we do to change it?‍

RR: The term diversity has been evolving. In the beginning, it was essentially focused on gender balance. So a lot of programs for social inclusion or even employment are related to the money that goes towards women entrepreneurs. It’s an imbalance! As a marketer, you’re supposed to understand the pulse of the market, which you get when you have full diversity on your team.

I think immigration has become much too political. When people ask, "Why are they in our country?" it’s silly, because the ones asking this have had grandparents or relatives that have been immigrants to this country in some generation! There’s a lot that needs to be done and I don't think there's been enough focus on it. ‍

AG: I'd love to hear some stories of cultural friction. Do you have any?‍

RR: When you arrive in a new country with a new culture, there’s bound to be different manifestations of various cultural practices. My first exposure was when I moved from India to Dubai, as they were culturally very different. However, I bridged these pretty well.

When you’re confronted with a situation you haven’t encountered before, don't immediately judge it. That country culture existed before you even came there. So be respectful!

For example, when I came to this country, I didn’t have the privileges I had back home. I had to do everything myself - washing clothes, washing dishes, everything. That's a culture shock for many, particularly those come from countries like India. I simply had to adjust.

My advice is to try to understand the local population and use it as an opportunity to enrich your own experiences. If you’ve decided to be a part of this country, be an integral part of it without losing your identity. I have Indian roots, and I feel very proud about it. ‍

AG: What advice would you have for Americans encountering immigrants or looking to hire an immigrant?‍

RR: I would say three things: Number one, remember that this person has left their country to come to yours. They’ve made personal sacrifices to make this journey. Welcome them.

Number three, they’re different from you because the country and the culture that they come from is not the same as yours. Celebrate those differences. It's beautiful. And remember, America was built on immigrants.

And at the end of the day, come back to the knowledge that we live on a special, precious planet. We have to enjoy the time that we’re here and leave a great legacy for the people that come after us.‍

AG: How has your identity as an immigrant evolved from the moment you left India? And do you feel like you’ve left anything behind?‍

RR: Leaving your country is a very big life decision, but in the 27 years I’ve been here, I’ve learned a lot. Could I have grown in India too? Absolutely, but I’ve gained a global perspective here.

I’ve realized the world’s commonalities, the aspirations, the fears, the desires, the apprehensions - they're exactly the same. People all behave like exactly how they behave in some other country, just the nuances and the cultural manifestations are different. As a marketer, you will have to understand those cultural sensitivities to be able to communicate in that context. Today, I feel absolutely at home running a global campaign, flipping from one culture to another.

It’s been very rewarding to be able to build a brand into a top 10 brand in the world. This is a journey that I'm thrilled to have taken, and if I had to redo it, I'd do it all over again.