In this Opportunity Makers interview, we connected with Maryam Banikarim, Head of Marketing at Nextdoor. During this conversation, Maryam discusses a variety of topics on the immigrant experience, such as her identity coming to America, our country’s approach to diversity & inclusion, and what being an immigrant woman in tech means to her. 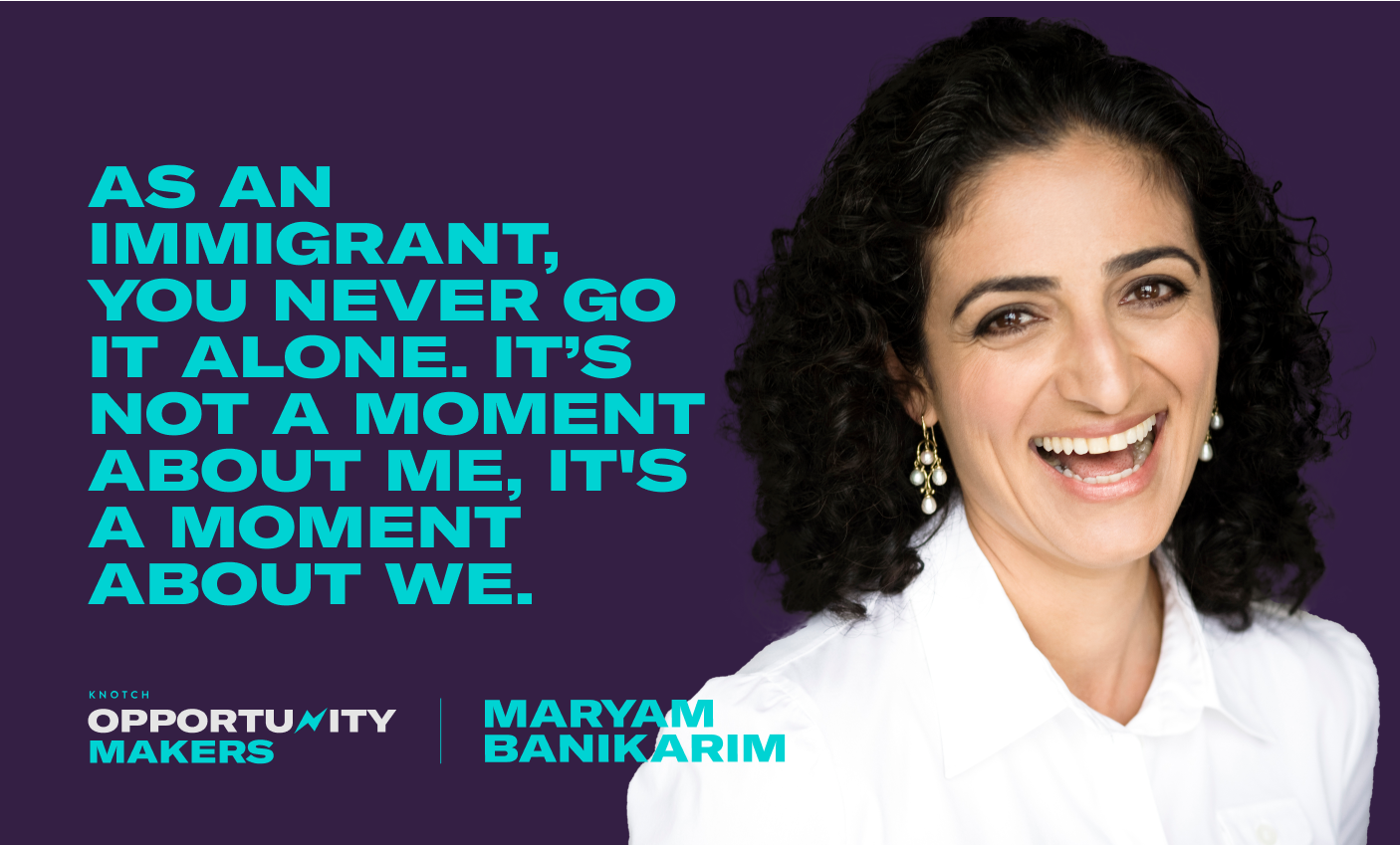 Maryam Banikarim: I'm originally from Iran, and when the 1979 revolution happened we moved to Paris. We ended up then relocating to a suburb of San Francisco called Lafayette when I was 11 or 12.

AG: When you got to the US, what was your identity at that point? Was it Iranian, French, or a combination of both?

MB: I think we have more awareness of identity now than when we did we were younger. I also didn’t have much of a choice - parents don’t ask you to move, you just go. On my first day of high school I showed up in my French clothes, and I immediately felt like I didn't fit in. I learned that you have to try and fit in to survive. And I knew that I didn't look like everybody else.

AG: Looking back at your approach to identity, what do you think about it now?

MB: Looking back, I definitely wanted to be like everyone else. At that age, we're all trying to just fit in. I was fortunate because I was clearly different, but that didn't stop me from joining every after-school club that would take me!

By the time I went to college in New York, I'd already begun feeling myself more. I transitioned from being called Mary, which was easier, to Merriam to Maryam. And coming to New York, you can be anybody you want. New York was the first place where I really felt like I belonged, and the “anybody I wanted” ended up just being myself.

AG: New York is so special, and I completely resonate with that. What was the hardest life adjustment to make here, and on the flip side, what was the best thing about being an immigrant for your career?

MB: While my family was fortunate to have means here, we didn’t have that infrastructure to have someone help me get a job or into college - I just had to make my own way. It was frankly a gift.

Going through the college process, I chose Barnard over Columbia simply by reading a college book, that was a year out of date, that said women go to Barnard. It was actually the best accident that happened to me.

Though I had to make my own way, it created this resilience. One of my favorite jobs was at Univision. As an Inranian working in Spanish language media, it was like being an immigrant in the US all over again. There’s many similarities between Hispanic and Iranian culture, and a gift of being an outsider is that you see things differently.

AG: In your role, as you hire and even mentor, what are your thoughts on diversity and immigrants?‍

MB: I’ve always known that different opinions are additive. I hire for diversity of thought and experience because people shouldn’t be debating the same thing - that won’t push the envelope.

While working at Univision, that community was very purpose-driven. In those days working in the Hispanic marketplace, you were empowering a whole subsection of the population. Looking at the numbers, you also saw the Hispanic buying potential, though that wouldn't convert because people were just stuck in their ways. You realize what's obvious for you is not obvious for other people.

Much of the Nextdoor executive team are from other countries.  That brings diversity to us as a global company, and I'm a product of that experience.‍

AG: What is your advice to immigrants on how they should think about their careers in the US?‍

You also need people at the top to advocate for you. I didn't know I could be that person until I saw that. And lastly, having people coach you to understand what you want and how to go for it is critical. It behooves all of us, as we help bring others along. ‍

AG: Who did you look up to as you were growing in your career? ‍

MB: I was fortunate to have many people that helped me along, such as countless women leaders at Barnard. Someone even nominated me for a Truman scholarship that I was shocked to have won!

I also had a sense of my own personal hustle. Each job for me came with someone inspiring, but also with its own challenge. So you have to continuously push yourself forward. I remember others telling me about their mentors, and I wondered where mine was. Finally somebody said to me, "You might be that person for yourself."‍

AG:  How do you view Silicon Valley from an immigrant perspective compared to the diversity of New York, and what could tech founders learn from Nextdoor and your experience?‍

MB: There actually are immigrants in the world of tech, as engineers. What we don’t have many of are women, particularly at the senior level. One of the appeals of joining Nextdoor was our female CEO and other women on the executive team, who funny enough are immigrants. That’s rare, and you see that play out in how they see the culture at the company.

Often I'm one of the few women in senior roles. But tech is much more casual than the corporate world. So while there's definitely a different culture and a hierarchy, there's still belonging.

When I first showed up at our headquarters in San Francisco, I joked that everybody had a backpack. The cues that you pick up in junior high on fitting in, that doesn't change. The good news is I don't worry about fitting in anymore. You can choose to abide by those cues or not, but recognizing them allows you to make a choice. And in the end what you want in life is choice. Choice and freedom. ‍

AG: Anything else you want to share?‍

MB: Immigrants don't take where we live for granted. We want to help our cities as well as our country. This initiative we’ve started to help New York City, NYCNext, has given us all something positive and something to give back. That’s inherently in immigrants’ DNA.

We recently held a music pop up in Times Square, with two dozen Broadway actors singing Sunday from Sunday in the Park with George. Many of them had won Tonys, including Bernadette Peters. It was amazing to see people come together as a community in a moment of joy and hope. It was truly the American dream and the possibilities that await us if we just step in.