In this Opportunity Makers interview, Anda Gansca, Co-founder and CEO at Knotch meets with Liya Sharif, Vice President of Marketing and Head of Brand at Qualcomm. These female leaders dive into many aspects of the immigrant experience, where Liya touches on overcoming the hurdles associated with immigration, the power of strong ideas, and the importance of surrounding yourself with others that support you. 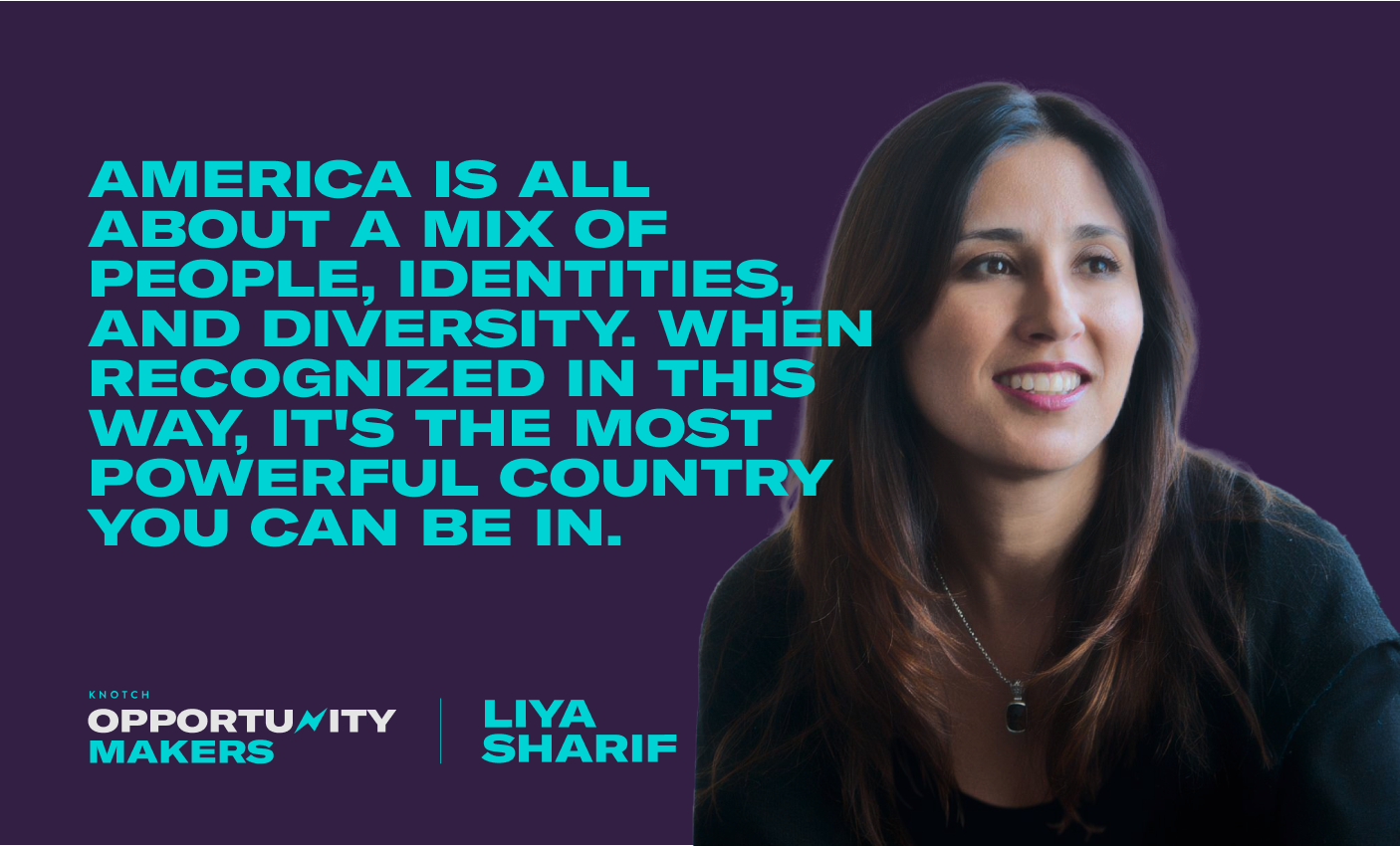 Anda Gansca: Tell us a little bit about where you're from, Liya, and your coming to America story.

Liya Sharif: I grew up in Azerbaijan in the former Soviet Union, on the border of Armenia and Georgia. The Soviet Union collapsed mere months after me and my husband left, and everything has changed since then. Coming to America, we had a very difficult immigration path. We traveled through Austria and Italy, saying goodbye forever to my friends and family, knowing that I might not see them in a long time. But as much as I loved my country I knew that I had to leave to find opportunity, as there was no freedom where I was from. When we left, I suddenly lost my culture and my family. I even immigrated while pregnant!

AG: Tell me a little bit about that moment when you thought you were saying goodbye to everyone and everything you knew. Do you remember it?

LS: There's a trauma that comes along with immigration. When you immigrate, there’s this energy associated with it. What happens afterwards, however, is this uncovering of the trauma of leaving behind everything you know and who you are. I remember the goodbyes. At the time when I was leaving, if you immigrated, you couldn’t return. So essentially I cut ties mentally and physically with everything I knew. But the desire to leave was so powerful, and youth is a very powerful platform. You have no fear.

AG: I still struggle with the guilt of leaving everyone behind. How do you think about life’s important moments that you were leaving behind?

LS: When I left, I felt hopeful that I could get my family out. The responsibility of first immigration immigrants is tremendous, but I was just so young. I was sad I couldn’t be in both places at the same time. Though I couldn’t bring my father or grandmother here, I did bring my mother, which helped with the guilt.

AG: I completely understand that. I’m curious, what was the evolution of your identity when leaving, arriving here, and who you've become? What was the tension between everything you needed here for acceptance versus who you actually were?

LS: Identity for me was all about survival. I knew that people would see me as an outsider, so I had to start from the beginning here. That’s when I gave up my identity or pushed it away.  I started establishing myself in my career and my personal life, but I slowly recognized the value of who I really am. I’m from Azerbaijan, I speak Russian, I’m a brown woman - it's a gift. I feel very different today than when I arrived in my identity. I’m an immigrant, an American, a successful woman, Azeri and Georgian and Jewish. All those parts I want to find out even more about.

AG: Do you identify as American today?

LS: There's so many definitions around what it is to be American.  America is all about a mix of people, identities, and diversity. When recognized in this way, it's the most powerful country you can be in. So I guess in that sense, I do identify as American.

AG: I’m passionate about this, as I think immigrants are often seen as not real Americans, or as opportunity takers versus opportunity makers. Another factor to consider is the difficult and costly process of hiring immigrants, and that people simply don’t apply for visas due to the cost. It's such a missed opportunity. Us immigrants bring so much diversity to the table, though it might not be as visible. What are your thoughts on this?

LS: I personally never experienced that people view immigrants as opportunity takers. I experienced amazing opportunities, mentorship, and recognition of my talents. For me, I was viewed as an intelligent, educated woman with an accent.

My story is one of being a successful immigrant who came here with nothing and built everything. But this immigration struggle is new,  and becoming a bigger political controversy. While I’m fully assimilated and accepted, with this newer era, it could change again. I hope that this is a blip.‍

AG: Even during and before the Obama administration, the H1B visa, or main work visa that’s typically handed to immigrants, has a cap on it. There’s limited access. Not to mention the probabilities of actually receiving one based on your country of origin or the company applying on your behalf.

Even if someone possessed this visa, there’s the cost of transferring work permissions or green card applications. This leads to less hiring of immigrants, because the companies don't want to spend the money. And the immigrants that do get hired? They get paid less.

When I started employing people, I thought there should be some diversity quota committed to creating opportunities for immigrants. For they in turn will create opportunities for others. I’m curious to hear about the makeup of your team and your partners. ‍

LS: My team at Qualcomm is very diverse, and that’s what makes our thinking so strong. And diversity doesn't mean not being white, diversity means diversity. It's bringing all parts together, making ideation and creativity that much stronger.

One big issue in America for women is feeling like they have to shrink for the men in the room. I think that my abilities and talents have proven that women can be equally powerful and as confident as men. I’ve said to other women, "You're powerful just by being a woman. Your power is to bring that perspective to the table. You need to feel that power rather than feeling like you are inferior.”

I also believe in strong ideas, and I'm no longer afraid to speak up. I have an opinion, yet if it's the wrong opinion, I'm happy to change it. When it comes to mentorship, I like to mentor women and men, because the more men start understanding women, the better our ecosystem.‍

AG: I love that. I believe there’s power in how much you believe in yourself. With age and great friends tolerate less of the bad and begin realizing the worth of your ideas and yourself. What do you think about this?‍

And finally - I don't hide my story anymore. That’s because I believe that through my story, people can see another perspective, on being an immigrant, a minority or a woman.