This interview in the Opportunity Makers series features Lara Vandenberg, Founder and CEO of Publicist. The Australian entrepreneur talks with Garrison Gibbons, Head of People at Knotch about her fascination with New York, staying rooted in Australia, her latest venture Publicist, and the value that immigrants add to the workplace. 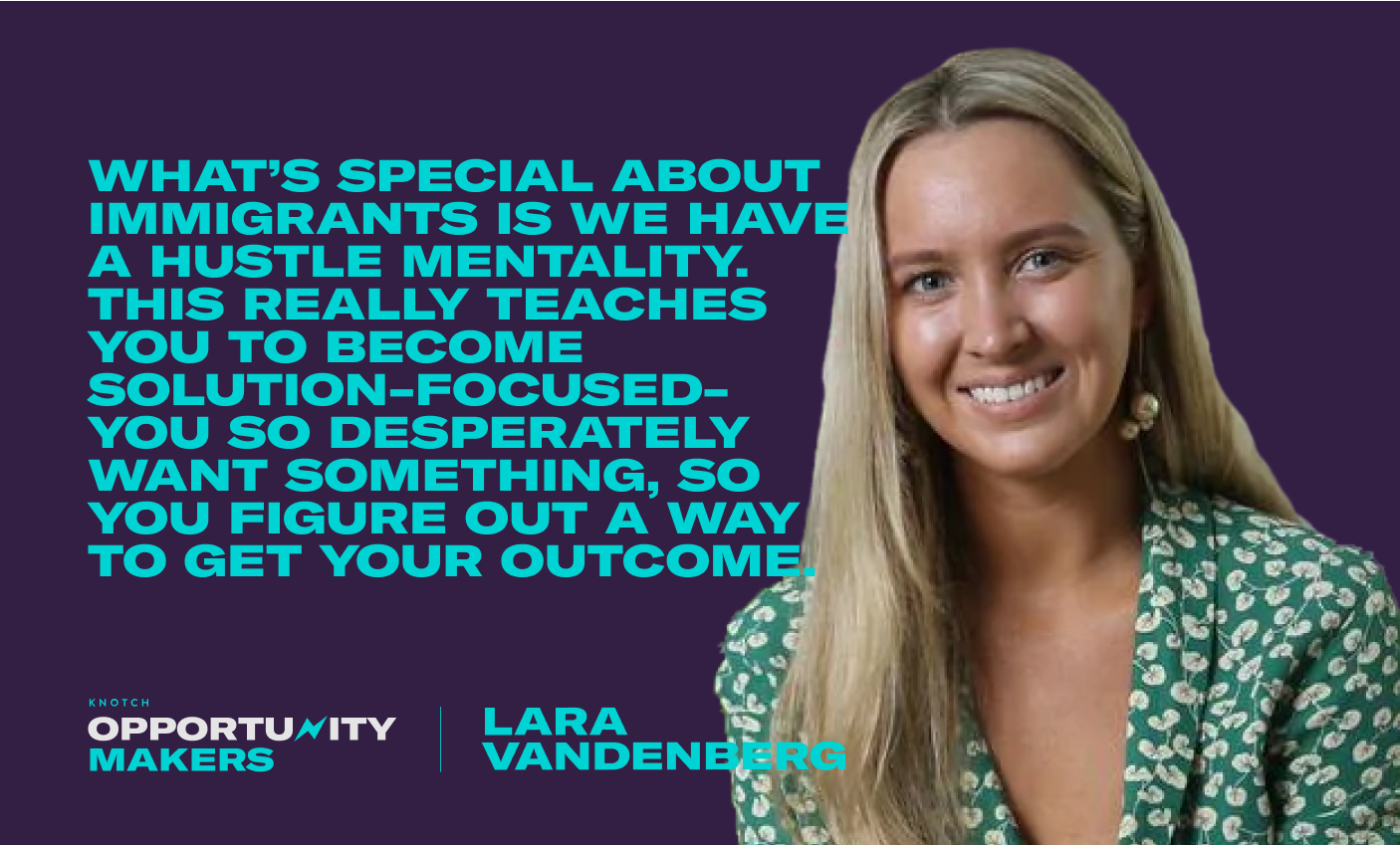 Garrison Gibbons: Can you tell us a bit about your coming to America story? What drove you to the U.S., and was that something you were always looking to do or something that you found yourself a part of?

Lara Vandenberg: From a very young age, I was infatuated by New York. And while at university in Australia, I would vacation there and network with fellow Australians to understand their journey to NYC.

A few years after ending university, I simply booked a ticket to New York. Didn’t know anyone my age or what I even wanted to do, but knew that New York was the place I wanted to be. I came over without a visa, which many Australians do. It was essentially a 90 day race against the clock to find a job and get sponsored, which I really treated as a job in itself. ‍

GG: What was the biggest adjustment that you made coming here that you didn't expect?‍

LV: In New York, you need to be an extrovert, especially when you don't have a network. You also need to lean into saying yes, because if you don’t, you miss out on countless opportunities. So my biggest adjustment was forcing myself to be extroverted and really network.

But I pushed past it and started saying yes to absolutely everything, even if I didn't want to do it. That led to friends and opportunities, and to the first job that got me sponsored.‍

GG: How has your identity as an immigrant impacted where you are today, as a founder of your own of your own company?‍

LV: I came to America in my early 20s, where the fall to the ground was fairly short. There was padding there - I could always book a ticket back home and live with my parents.

However, what’s special about immigrants is we have a hustle mentality. If you can't get to point A in a linear direction, you figure out avenue B or C or even Z. This really teaches you to become solution-focused - you so desperately want something, so you figure out a way to get your outcome.‍

GG: How do you stay grounded in your Australian roots? And as you become an American founder, how do you support Australians as well? Did you feel the need to do this, or is this a way to stay rooted in Australia as you continue to live in America?‍

LV: We opened Publicist first in the US and naturally, we then launched Publicist in Australia at the end of July. This was not only because of my connections, but because Australia also has phenomenal talent in the communications and marketing industry. We would love to even open a bigger office there! I love to see Australians move to the US because I see that hustle and initiative, and I see that starry-eyed person that I was years ago when I moved here. ‍

GG: What unique skills do you think immigrants provide the workforce, and that you would advise young people like yourself to sell in the interview process?‍

LV: Fearlessness, relentlessness and determination are soft skills that you intrinsically have to possess if you’re an immigrant uprooting your life. With immigrants and Aussies in particular, relentlessness is probably the one characteristic we just don't lose. And if we do, we’ll pack up and go home. So I would recommend applicants play into those three skills. ‍

GG: As a woman and immigrant founder, how do those parts of your identity play into your overall story? What has the dynamic been transitioning from being a contributor to a founder, and what’s been your journey cementing yourself as a founder in a world designed for the white American male?‍

LV: Being a female and being an immigrant, we are in the best position that we've ever been in. I think 2020 has been absolutely pivotal, but also years prior have also brought us to this position. However, there's a long way to go. When it comes to raising money, everyone looks the same, especially in places like Silicon Valley. So playing to your strengths, and educating people on what makes you unique and why difference is good can really make an impact.

When hiring a team and building a company, think about diversity, in thought and in creativity. Thinking back to being a founder, a female and an immigrant, your uniqueness is a skill. You’re able to educate people on different industries, trends and visions. It’s a privilege us immigrants have right now. ‍

GG: What are some of the misconceptions people have about immigrants that you’ve experienced throughout your career? What misconceptions have you overcome?‍

LV: There are debates and studies on whether immigrants in the US are taking jobs away from Americans, or whether we are adding to entrepreneurship through driving innovation.

In my experience, my team is entirely American, and I'm an example of an immigrant adding to the economy, but that’s probably a misconception I've been faced with. We experience that when we go to the visa office and need to document why we’re fit to do this job over in America. While I completely understand and respect the processes, that's been a really big misconception.‍

GG: How can leaders better amplify the voices of immigrants, and ensure that their overall storytelling is inclusive of the immigrant community?‍

LV: We need to change the way corporate America recruits and the systems they’ve had in place for decades. At Knotch, we spoke about being a culture add as opposed to a culture fit. Meaning, there’s a diversity of people, opinions, and underrepresented groups.

When it comes to hiring, we need to figure out how to diversify those processes. I'm a strong believer in mentorship, and I myself am both a mentor and a mentee!

As executives, we can change the graduate recruiting system, because we're not going to see change if we just keep on hiring the same people into the same positions. It’s something we need to change as soon as possible. ‍

GG: Absolutely. I know that Publicist is centered around communications and marketing execution through the use of freelancers or a gig economy setup - how important is it for inclusivity to be less structured based on culture or differences, and more structured around the inclusion of all voices for a more inclusive strategy?‍

LV: That actually goes back to the marketing debate of globalization versus localization of messaging, and there are advantages for both. For example, there might be a general worldwide campaign that may not resonate in Asia or the Middle East, so it’s important to strike a balance. Holistic and integrated marketing managers employ more localized messaging, which is important, but try to be as cohesive and holistic as possible. It's a tough balance to strike. ‍

GG: As you know, we are holding this conversation around National Immigrants Day, a holiday not so well-covered today. What are some ways that you'd increase visibility around immigrants, and celebrate their contributions to this country? How can we remove the politicalization or stigma around immigration and start focusing on the people and their stories?‍

LV: It needs to start federally. While HR can implement initiatives to celebrate employees and their cultures, celebration needs to start at the top. Not to mention the numerous immigration policies that need to come through in this country. So until we get there, it's going to be incredibly difficult for immigrants. We haven't had the most just or fair experiences in the last few years.‍

GG: Working in HR, I know that hiring an immigrant is a lengthy, challenging, and expensive process for companies of any size, and it requires a company’s dedication and willingness to do so. The more federal support and guidance will only encourage more companies to hire immigrants, and will remove the extra steps required to hire them.‍