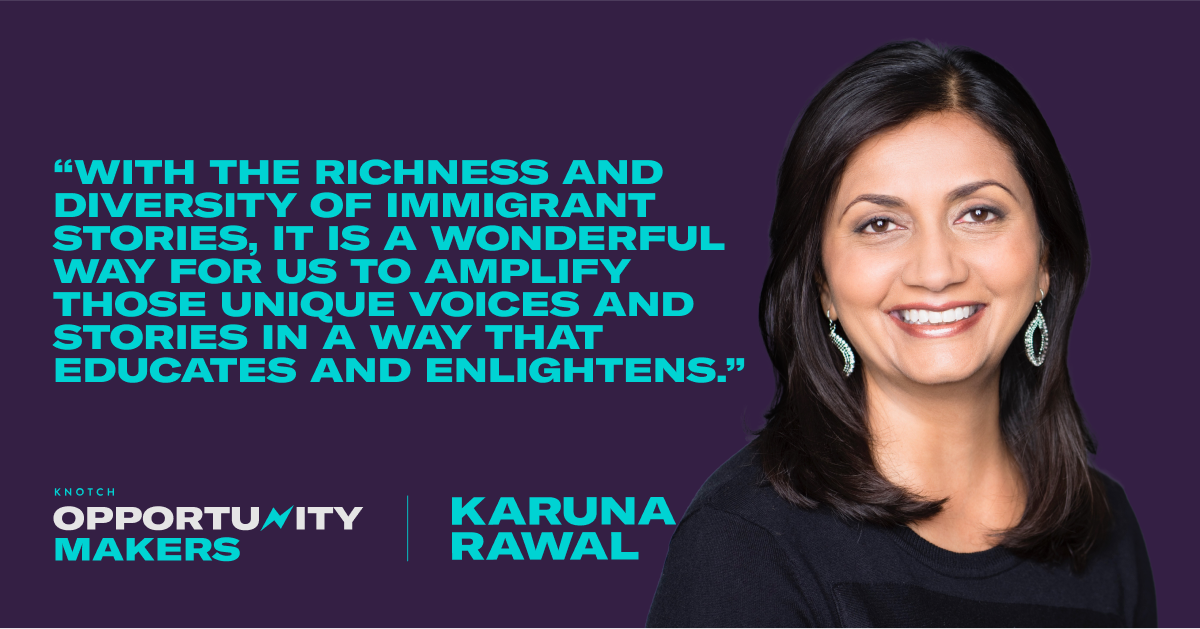 In this Opportunity Makers interview, Karuna Rawal, Chief Marketing Officer at Nature's Fynd, speaks about her experience as an immigrant leader. She shares her perspective on the resilience that immigrants bring to the table, the American Dream, and how The Brady Bunch shaped her view of American culture.

What was your “coming to America” story?

I actually have 2 coming to America stories. I first came to America as a 9-year old child of an Indian diplomat. But I had lived in Egypt, India and Bhutan before arriving in New York City. We came here straight from Bhutan and the contrast was pretty stark.  From a tiny monarchy in the Himalayas with no running hot water and only yak’s milk to the craziness of JFK international airport and a high rise apartment in mid-Manhattan is a very vivid memory to this day. After 3 years, we were supposed to move again to a new country but my father decided to resign so my siblings and I could have a more stable education in the US. After a year in India, I came back to the US at the age of 13 on a green card once my father was employed and able to sponsor us. This second time was very different because our lives became much more similar to other immigrant families who saw America as their new home.

‍
What was the biggest adjustment coming to the U.S.?

Even though I had completed 4th grade, I was placed in 4th grade again in the US because of my age. And while I knew English, my Indian accent was difficult for my teachers and other students to understand. A lot of my initial understanding of American culture and norms came from watching popular TV shows like The Brady Bunch. I was fortunate to be in a relatively diverse public elementary school in NYC but I was still the only Indian in my school.  Most kids thought I was Native American and kept asking me what “tribe” I belonged to.  Many didn’t know where India was so it took some time before I was able to assimilate and feel like I belonged.

How do you accredit your experiences as an immigrant to your current achievements?

I think being an immigrant engrains this idea of resilience and pursuing your dream against the odds.  I was very motivated from a young age to work hard, be disciplined to achieve success as measured by societal standards. I was always conscious of the sacrifices my parents made in bringing us to America so we could have a great education and get a good job, etc. That deep respect for education and the pressure to prove myself is always there in the back of my mind.

How does your identity as an immigrant shape your role as a storyteller?

As a brand builder and storyteller, my experiences as an immigrant have been infused into everything I do. I am very conscious of the importance of reflecting a variety of stories and diversity of human experiences for the brands I have worked for. I am also aware that my lived experience is just one of many different experiences that “Americans'' have gone through. From my early days at P&G when I worked on cultural insights for our Hispanic marketing efforts to recognizing that the brand I am building at Nature’s Fynd needs to reflect the diversity of Gen Z/Millennials, I try to ensure that the brands I work for take the time to gain a deep nuanced understanding of culture and diversity.

People often say that immigrants are the bedrock of this nation. What unique value do you think immigrants bring to the US and help shape our culture?

I think the most important value immigrants bring is the resilience and desire to succeed in the face of remarkable challenges.  The courage that it takes to leave your family and country behind sometimes permanently is really underestimated.  But they do it to make a better life for themselves and future generations. And they do it because of their love for what America represents, which is a beacon of possibilities – more so than any other nation in the world. To me, the courage that it took for my parents to make the journey to the US and to be so far away from everything they knew and were familiar with in order to build a new life is incredibly inspiring. And millions of families from all over the world have done that again and again which is what creates the bedrock and foundation of this nation.

We all are familiar with the “American Dream.” What was your early perception of the American Dream and how has it evolved over time?

My early perception was very much influenced by The Brady Bunch and other shows that represented the quintessential American family life! It was something that seemed so foreign to me but also desirable as an immigrant child. But yes, time has definitely helped evolve that vision! I think more than anything it has been seeing that the American Dream has so many variations and themes and that it also isn’t achievable for so many. The significant inequities in achieving that dream for some many people in this country are evident to me as an adult, a marketer and a mother. As the country grapples with issues of income inequality, healthcare and other big issues, it’s clear that we have a lot of work to do to help everyone achieve the American dream.

Immigration in this country is often politicized, yet oftentimes we forget the humans behind the conversation. How can brand leaders better amplify the voices of the immigrant community?

As we think about the content we create as brand leaders, it is a great opportunity for us to ensure that different voices are heard.  With the richness and diversity of immigrant stories, it is a wonderful way for us to amplify those unique voices and stories in a way that educates and enlightens those who aren’t engaging with immigrants or only doing so in a very narrow way.  Given our bitter political divisions, increasing fragmentation of media and a concerning rise of anti-immigrant sentiment, I think it is more critical than ever for brands and brand leaders to be cognizant of the messages and the voices they put out.

What value would you say young immigrants can showcase as they continue their career journey?

I think things have changed a lot compared to when I came to this country when my primary goal was to try to blend in and not be seen as different. I think it’s important for young immigrants today to be proud of their heritage and to find the balance that they want between their origin culture and the American one. It no longer feels like one has to choose to assimilate or not be accepted.  At least that is my hope for future generations of immigrants as more of them emerge in American society in a myriad of fields and make their contributions. I am excited to see that happening more and more across a range of fields, not just medicine and engineering – especially in the case of South Asians!