In this Opportunity Makers interview, Knotch CEO Anda Gansca connects with Gary Vaynerchuk, CEO at VaynerMedia. Gary touches on a variety of topics related to his immigrant experience, including his coming to America story, what work ethic means to him, and how adversity is critical for future success. 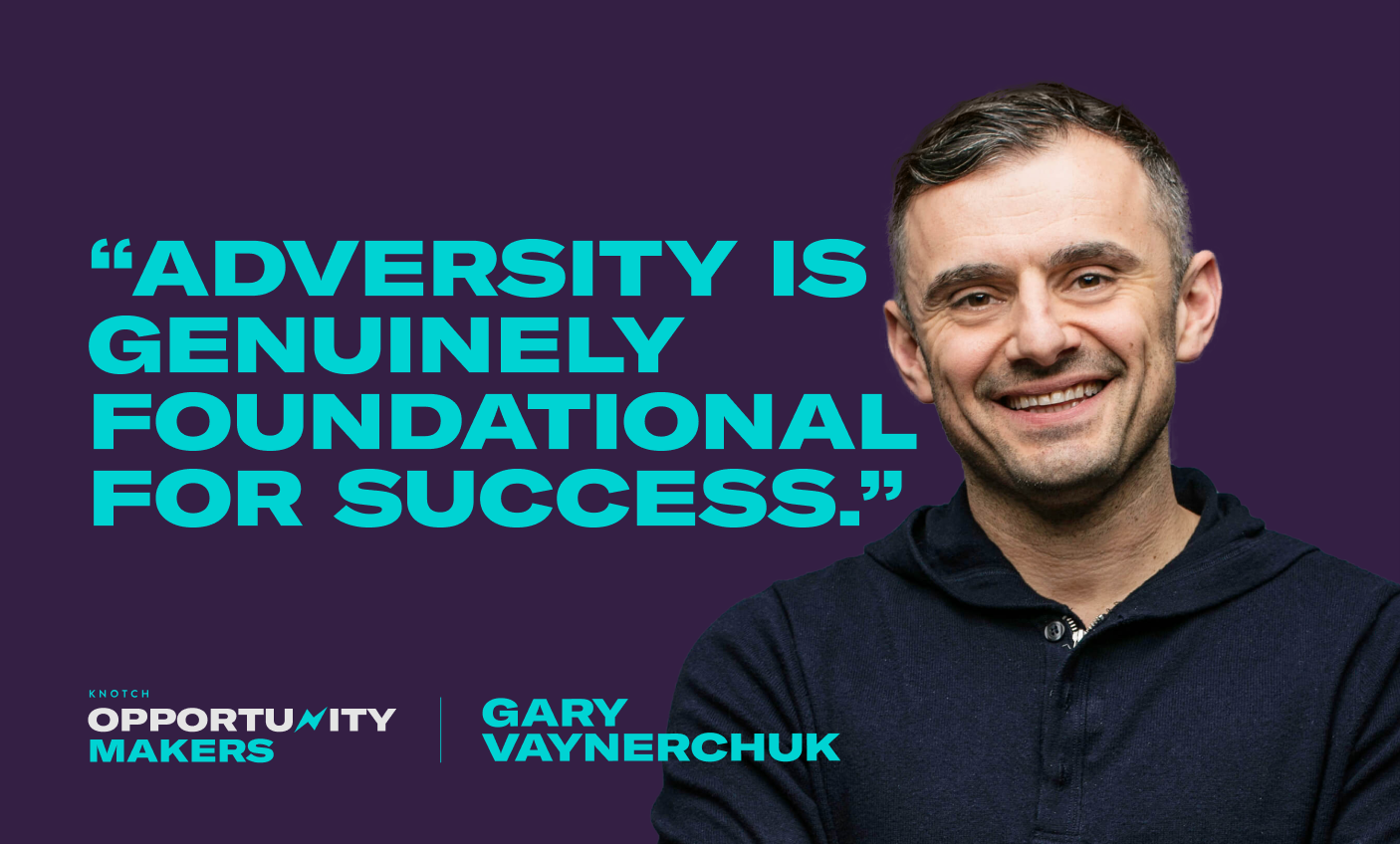 Gary Vaynerchuk: I was born in Belarus in Babruysk. This will make sense to many immigrants, but I was literally born nine months and one day after my parents were married - they were pretty young. My coming to America story started when my dad’s great uncle in America visited us, and recognized my dad’s entrepreneurial spirit and desire to be in America. It was an impossible dream in Soviet Russia, but there was a Jewish organization created to help persecuted Jews escape tough situations. The Soviet Union’s economy was collapsing, and Jews faced heavy persecution there, and still do to this day. I was fortunate to be able to leave, though I recognize how hard my parents and I worked to leave.

This path we took to America was pretty common, and I've met many Russian Jews through the years with similar journeys. For us, we had a great uncle that planned to take care of us when we arrived in America, which comforted our group of nine as we were coming here.

Unfortunately as we were traveling, he passed away. Luckily, my dad's cousins were gracious to us when we arrived, but it was tough. The economy was also quickly crashing, and it wasn’t the greatest era in America. It was a pretty difficult transition. However, when my dad took a job at the liquor store my great uncle owned, it really kickstarted us making it in America. ‍

AG: How old were you when you came to the U.S., and how much of those early years do you remember? ‍

AG: In the first few years as you started hustling to survive, how did this drive impact you? ‍

GV: I had a big epiphany a couple years ago where I thought, "Wait a minute, Mom. We lived way below our actual means even when we had some.” It was obviously a joke, but it affected me in the most profound way. My mom lost her mom at five. What affected her was thinking what would have happened had she never moved out of Russia. For immigrants oftentimes, the immigration itself is that affecting moment, but mine was that my parents never spent money on anything, and I’m completely a product of that work ethic.

One great disappointment in my professional career is that many people try to say that I champion hustle or work ethic the most. It’s difficult because I believe in work ethic more than anything. But I used to communicate it as hustle, which became negatively associated with burnout or mental health issues. It’s sad, because I never thought of it as related to burnout or mental health issues.

One example of this is my dad. He worked incredibly long hours, six days a week. He took off only Christmas Day and New Year's, where he slept all day. My mother worked incredibly hard as well, taking care of three kids with no help. But she also gave us too much entitlement, since she took care of everything. Essentially, both of my parents came from that old country mentality, and it's shaped me completely.‍

AG: I think of mental health as something that immigrants aren’t immune to in any way, and I'm sure you struggle with it. I've struggled. There's something about that generation that you talk about, where they had no choice or safety net. They made a survival decision, and it was really the only decision they could make.‍

GV: I don't think people realize how fortunate they are. I can’t blame anyone for that, because nobody understands anything completely until they live it. Parenting is the funniest example of that to me. We talk about our parents one way, and then become one and finally go, “Oh. I get it now.”

The other thing I think people struggle with is complaining about money, while drinking a $6 Starbucks coffee. When you're raised the way I am, you think about money differently. I remember for my dad’s huge 30th birthday party, my sister wore a dress that my mother and grandmother made from our curtains. And it was a huge party! I just don't think people get it when it comes to money.

Also, the amount of incredibly educated, capable individuals that come from all over the world to America to clean toilets is extraordinarily high. People don't realize the gratitude that comes from that, and how invigorating the creation process can be in a world where you can’t do that. This just reminds me of how much I love the game.

While I enjoy the accolades of what comes with being a successful entrepreneur, what I love most is when my friends from high school and junior high defend me by saying, “You don't know that this guy literally didn't even go to parties. He instead went to garage sales at 4:00 in the morning." I love the game so much. I was born in a place that demonized this game and ended up in a place that puts the game on a pedestal. ‍

AG: I’m curious what you mean when you say you love the game. How much of that is either DNA, or you experiencing America’s can-do spirit? Or perhaps even your parents, or just part of being an immigrant? Lastly, do you think if you had been born into an American family, the same would have happened?‍

GV: I think I could still develop this love of the game if I had been born into a frugal American family facing financial difficulties. But there is a difference when somebody makes it from a low-income household in America, since there’s an incredible privilege in knowing that you're American. Adversity is genuinely foundational for success.

I'm always fascinated by entrepreneurs that were children of union workers or teachers, and how they tried another path. At 14 my dad dragged me into helping out at the liquor store, so I'm essentially a son of a merchant. There was no discussion. Without a word being exchanged, I knew I would be going to the store every weekend, every summer vacation, every school vacation, contributing to this family store.‍

AG: I did the same. I started at 13 selling fridges and other appliances.‍

GV: But it gives us the advantage of so many years of experience. I love to tell people I'm 44 years old, but I'm really 90. I've truly accumulated 38 years of experience! I spent half of my time in the summer helping out the business.  It’s weird because many people put education instead on a pedestal for immigrants. Being a poor student led me to instead spend more time on my craft. And when you're selling fridges at 13, you're prepared for what you do now. And same for me, so I understand. ‍

AG: During the hiring process, does Vayner have a stance on diversity as it refers to immigration? If not, what do you think about it?
‍

GV: Vayner does have a stance standardized around gender and race. I used to be so anti-status quo until I realized that subconscious bias was a real vulnerability close to my heart. No matter who the leader is of any organization, there is always going to be subconscious bias that leans towards their reality. As you can imagine, the amount of immigrants that weren't great students that are running through my ecosystem at Vayner is very high. Diversity has been a little bit easier than other subject matters for us. I was lucky, growing up in a very diverse environment in Edison, New Jersey. As the world has become more thoughtful, we always find ourselves in a pretty nice spot, but my circumstances were lucky.

I must say Anda, I am blown away by how many immigrants were fortunate enough to get into this country, and then don't want other immigrants to come here. It’s stunning, this hypocrisy at scale. People will be sitting around their business tables, and instead of saying, "Well, I went through the right process. They should too” they’re saying, “I don't want them to come in." I think this comes down to, are you somebody who builds tall buildings, or are you somebody who likes tearing down other people's buildings because you're incapable of building your own?

So much of this is based on massive amounts of insecurity. I'm fascinated that people don’t understand that whether immigrant or otherwise, people are either creating or people are taking. People definitely misunderstand the macro scenarios that are playing out around this issue.