In this Opportunity Makers interview, Garrison Gibbons, Head of People at Knotch, connects with Fahad Khawaja, Founder of Hue. Fahad discusses his coming to America story, the immigration system, and the responsibility brand leaders have to reflect diversity in all its forms. 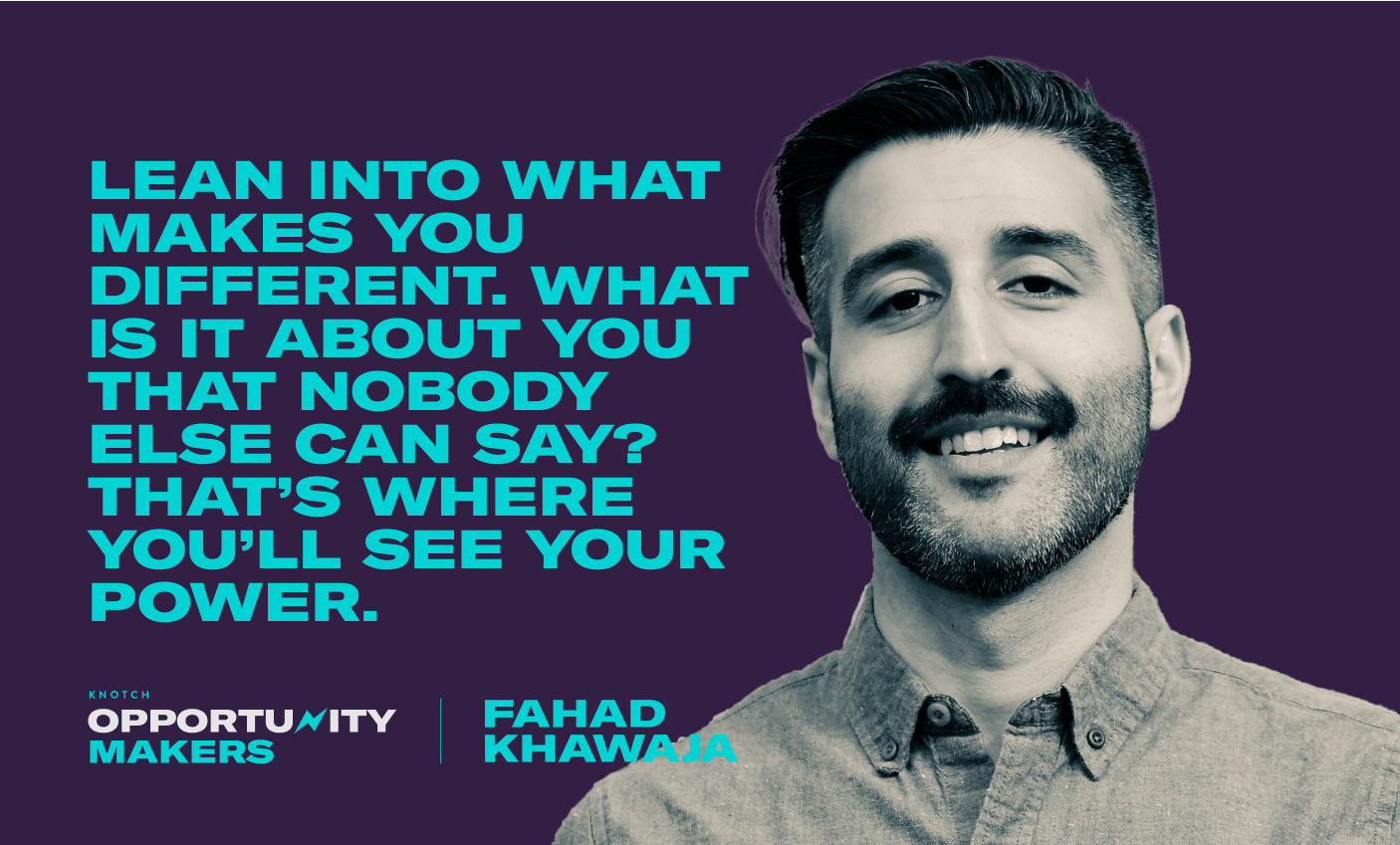 Garrison Gibbons: What was your coming to America story, and what was your biggest adjustment?

Fahad Khawaja: I moved to the US when I was 17 years old. Growing up, I was very accustomed to seeing people from various backgrounds, countries, and religions, but upstate New York was much less diverse.

Another adjustment of course was the physical environment. I was now facing snow and the changing of seasons. I'm not a fan of the cold!

GG: How do you accredit your experience as an immigrant to your current achievements? In what ways has your immigrant status aided you or even harmed your career growth?

FK: Being an immigrant has influenced the way I solve problems, understanding diverse perspectives. When you're an immigrant coming to a new country, you have to adjust to different customs, vernacular and cultural nuances. Growing up as a Pakistani around the Middle East, I built empathy being surrounded by people different from me. Being able to collaborate with everyone has been instrumental to my professional achievements.

In the corporate world, I faced the barrier of not encountering people who looked like me. I didn't have clear mentors to follow with similar experiences, so it was tough to get ahead.

GG: How does your identity shape the way that you approach storytelling throughout your career? How did that identity increase the visibility that you gave to certain communities?

FK: I think my identity only helped me. Coming from what is considered an ethnic minority in this country, I held a different perspective than others in the boardroom, influencing the way I told stories. I think we often take for granted how our early experiences shape us. When you're a kid, you just want to fit in. As you get older, you start to see the value of your differences. Those are reasons that people should be hiring you, to tell stories in different ways and amplify those voices that need to be heard.

GG: How do you stay rooted in where you're from and celebrate that part of you?

FK: It's not easy. I did spend a lot of time assimilating. I found an instantaneous connection with those who had lived abroad or in more diverse communities, or who at minimum, even had a curiosity about other parts of the world.

Even if they didn't grow up where I did, where there's common values, there's also common ground. This helped me stay much more connected to who I am and my values, and what I think more broadly, makes up my community.

GG: What's a common misconception people have about immigrants? What misconceptions have you had to overcome or redefine?

FK: When I first moved here, people joked that I was an Arab prince!  I’ve been mistaken for all sorts of things. People have mispronounced my name. And so on.

When people take the time to have a one-to-one connection, misconceptions based on tired stereotypes start to fade. For example, something as simple as a name means a lot. So much can be addressed by connecting one-to-one.

GG: How can brand leaders better amplify immigrant voices and remove the politicalization that comes with it?

FK: The word immigrant doesn’t mean just one thing. It encompasses different backgrounds and countries - you can’t lump all immigrants into one group. And as brand leaders, you have to tell different stories to represent those unique communities.

Brand leaders tend to go to the same people again and again, while marginalizing other voices. Demographically, in the next 10 years, the country will be only more diverse. So, if not now, then when will brand leaders take time to get in touch with and design for those communities? It's not just about marketing to them - it’s designing things that solve their problems. That's really where you'll make change.

GG: What advice do you have for young immigrants who want to showcase what their unique experiences bring to the workplace?

FK: Lean into what makes you different. What is it about you that nobody else can say? That’s where you’ll see your power. There’s also the reality of the actual immigration system itself.

Regardless of how good you are at what you do, you’ll have to go through many hoops in the immigration system. Immigrants need to know their value, as well as understand the process and find advocates to help them get ahead.

In my first job, my department head expressed that I was very valuable to the team. To have people expressing your worth at the beginning of your career can make all the difference. With Hue, we can connect you with supporters and advocates throughout your journey. I wish there had been

something like that for me at the onset of my career - it would have made the process much smoother for me.

With young talent, It's not that people don't have the skills, the experience, or even the enthusiasm. They don’t always know how to shape their story. Mentors can help. My hope with Hue is that we give people access to opportunities and to people who can help tell them those stories well.

GG: What do you find is missing in the immigration conversation? What dynamics are often forgotten when we glaze over immigrants as simply one group?

FK: The idea that people are human is often lost. It’s so simple, but it’s why brands are so powerful. They have a responsibility to tell stories with nuance, with specificity, and that treat each person like an individual with their own unique experiences. Brands can not only shape culture, but really create progress and drive social change. We should really be building brands that have a purpose. Brands shouldn’t just solve a customer’s problem, but instead find ways to create change for communities overall.

And the only way to do that is through nuance. There’s a complexity to identity, and brands should be expressing that nuance more.

FK: We need to see more people actually building complex narratives. There’s lots of opportunities for brands to create these, where it's not just a story of a Black woman, for example, but a story that tells you who she is, her thoughts about herself, and how the brand plays a role in her life. We need to see more of these stories.

We’ve seen few brands hit on this intersectionality. However, the brands that are going to win are those telling those nuanced stories. You can't just tell the same story with the same stereotypes with the same conclusions - that's not our world anymore. Consumers will call you out and you need to be able to answer that.

GG: I actually saw this quote the other day from Lily Zheng, a DEI consultant. She said, "Intersectionality is why we design for the black, indigenous, neurodivergent, disabled, Muslim, undocumented, low income queer trans woman. Not because she exists as a real person in front of us, but because designing for her means we're working to undo racism, colonialism, ableism, Islamophobia, state violence, classism, homophobia, transphobia, and sexism."

FK: Exactly - why aren't brands designing for all those different layers of identity? Perhaps they just don't see those layers and the need to design for them. They might even see it, but find the complexity expensive and complicated to accomplish. They might even think there’s no need to make a statement.

To these people, I say that it’s really recognizing people and meeting them where they are. When you do this, you’re building customer relationships and brand affinity that will last.

GG: What are some ways that we can increase visibility of immigrants and address the nuances that come with this community? How can we celebrate the value that immigrants create instead of take?

FK: Celebrate the differences immigrants on your team bring daily, just like you would for anyone else on your team.

Visibility can also be recognizing that someone did a good job not just because they're a hard worker, but because it’s built into who they are. Their approach is based on their background, and unique way of approaching problems. It’s both.