In this Opportunity Makers episode, Knotch CEO Anda Gansca kicks things off with Carla Hassan, Chief Marketing Officer at Citi. In this discussion, Carla talks about the hustle that immigrants have, the link between immigration and diversity, and how to tell stories rooted in humanity. 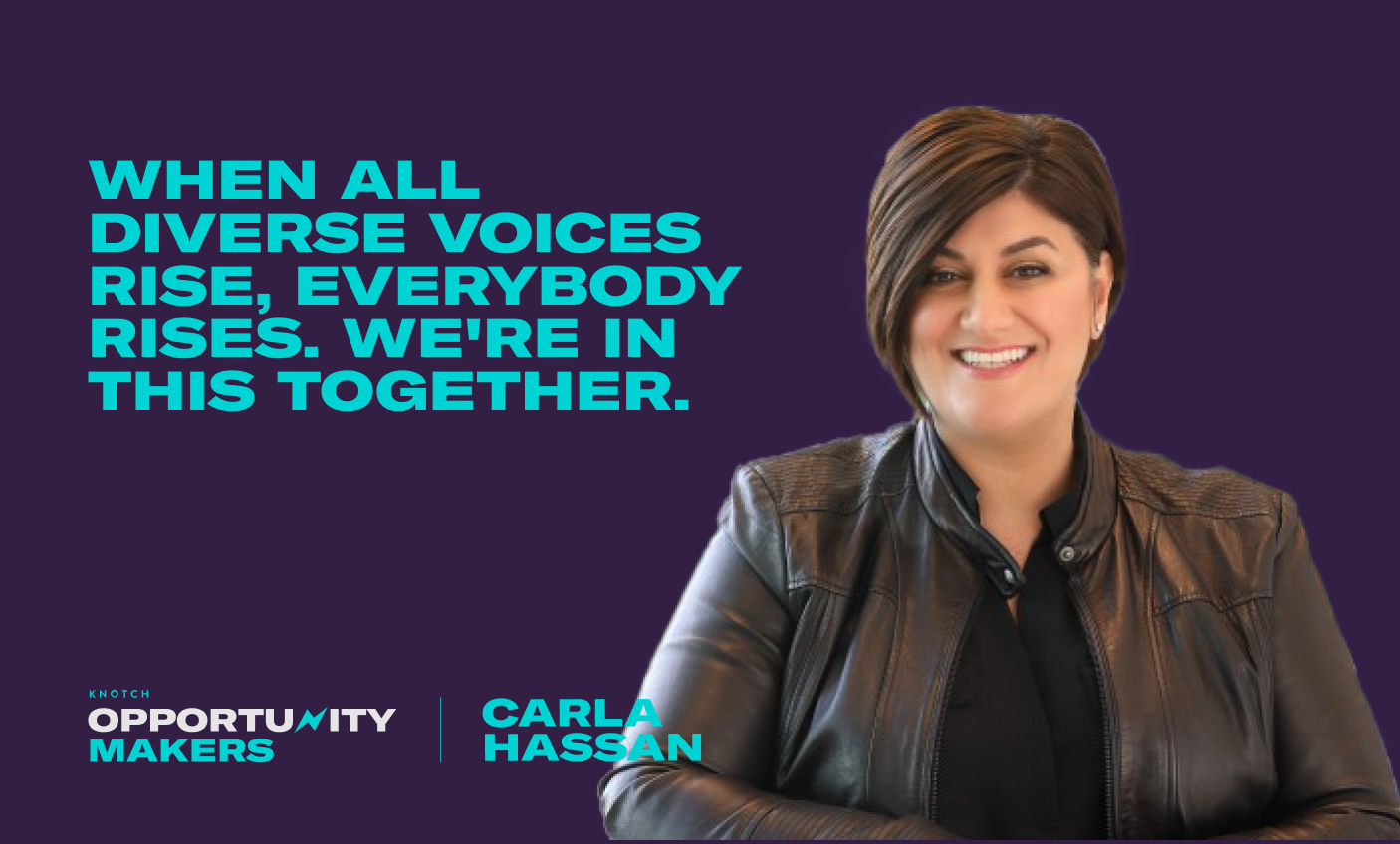 ‍Anda Gansca: Let’s jump into this conversation, Carla, starting with your coming to America story.

Carla Hassan: Thank you, Anda. To start, I was born in Lebanon and raised in the UAE, Sharjah actually. I came to the US when I was 14 in the summer of 1990. When Iraq invaded Kuwait in September, my father decided that we were staying in the US, two weeks away from starting school back home. And that was it, decision made. I had just turned 15, unable to go home and say goodbye to my friends.

This was also not a time of extreme niceties towards people from the Middle East. I heard things like, "Go back to where you came from” or "Oh, don't make Carla mad because she'll go to the car and get her bombs." It was difficult, plus my parents’ guilt and them trying to pretend that everything's okay, but of course, it’s tough.

AG: Where in the US did you end up landing initially? And second, how good or bad was your English?

CH: I went to an international school in Colorado where some family lived, and everything was taught in the British tongue.  So while my English was great, I had a very distinct accent, with a touch of Arabic. When I get tired, a lot of the language comes back. I can go from Arabic into English fairly easily.

AG: What was the hardest part about transitioning into your life as a teenager in the US?

CH: The hardest part was striking a balance between who you are and how much of yourself you shed to assimilate.

I made a decision when I was young to be as American as possible, with all the negative associations going on at the time. I just wanted to be accepted. Several years later, I started talking about authenticity in leadership and personal authenticity, and I felt like a farce. It wasn't until then that I forced myself to say, “You have a lot more to offer because of who you are and where you came from, not in spite of it.”

AG: I love that. There's this degree of otherness or foreignness that you have to quickly shed to be accepted. For me, it’s happened in fundraising and countless other times. Do you think that being an immigrant helped you in your career? And if so, in what way?

CH: Immigrants bring so many different perspectives to the table. Any immigrant that I've known, we feel so lucky that we’re here. Failure is not an option, because once you’ve decided that this place is now home, and that this is a land of opportunity, you can't go back. For me, it's helped me dramatically because I've wanted to succeed. I’ve embraced everything the US has to offer and that other places wouldn't.

I also feel like I've created opportunities for others that have similar stories because I understand how hard it is. However, the other component of being an immigrant is how our families feel about our work and our success.

Maybe I'm generalizing, but when you deliberately leave your home, you want to make those people proud. I think immigrants take advantage of that more than people who live here, who take it for granted that they were born and raised here in the US.

AG: Yes! There's also something about leaving your home where your brain says, “I have no safety net.” Instead, you run fast towards any opportunity.

CH: So true. Failure's not an option. You do whatever you can to make sure that you're successful, even taking jobs that you wouldn't normally take, or taking advantage of the opportunities you’re provided. Because where do you go if you don't make it?

Being an immigrant, you're a hustler. I’ve never met an immigrant that doesn't hustle or doesn’t seize opportunities. At work, if people didn't want to take a role, I put my hand up. Now inherently, that's a little bit of my character, but I would embrace opportunities and challenges.

AG: If you're not that type of personality, then you wouldn't end up in the US. You'd go back to your comfort zone, so it goes hand-in-hand. What is a misconception that people have about immigrants? And what would you say to someone who doesn't think that immigrants are great for any country?

CH: A big misconception of immigrants is that we're just here to drain the U.S. and then head back to where we’re from. Or that we'll never belong or want to be here. That couldn't be further from the truth. Most people come because it's a place to really make a difference. And by the way, they continue to help their families or communities back home.

These kinds of misconceptions don't help immigrants become a part of a community. Just because someone comes from a different place, has a different accent, or looks differently than you, doesn't mean they love this place any less.

AG: What do you think is the relationship between immigration and diversity?

CH: I think they're integrally linked. When most people think of diversity, they think of it as the color of someone's skin or someone's heritage. A lot of immigrants come to the US assimilate so seamlessly that they become an invisible minority. As my Black friends like to say, I'm white passing. Many immigrants who change their accents and lack visible differences can be seen as everybody else when they are in fact diverse. They bring with them different perspectives, and they are just as diverse as someone of a different skin color, religion, or ethnicity.

AG: I think assimilation and passing gives us some level of privilege that others don't have. The downside is that we don't look different, and you become an invisible minority. There's that growing gap between your identity and what you present to the world that creates countless other challenges.

CH: Absolutely. You want people so badly to know that you’re different. Embracing that difference can be such a positive for an organization, but what’s the balance?

I have had people who, when they know that I'm an immigrant and Middle Eastern, behave slightly differently around me. We'll go out to dinner and people will assume I don’t drink, but I do.  To be fair, they're just trying to be respectful, but never before they knew I was Middle Eastern did I get that.

AG: If I hear another vampire joke...

CH: Exactly. You're an accomplished entrepreneur, and their go-to joke is, "Are you a vampire?"

AG: When it comes to you as an immigrant, how do you think of telling stories from that perspective? When it comes to embracing the diversity that comes from immigrants, how would you advise other CMOs and marketers to think about this invisible minority?

CH: I like to tell stories rooted in humanity that draw on deep experiences. Everybody brings their own experiences to the table, yet immigrant stories are a bit deeper, and come from a soulful, thoughtful place.

Because no one could ever put themselves in my shoes, I work very hard to understand the stories of others. So empathy and storytelling are dear to my heart. Obviously as a marketing leader, we do this with data and science behind us. However, your personal experiences become much more poignant in storytelling.

I like to say, think about immigrants the same way that you think about others visibly diverse from you. They may not visibly be different to you, but their experiences and where they come from are equally as important. When all diverse voices rise, everybody rises. We’re in this together.

AG: We're stronger when we stand together. I think creating true inclusiveness means really listening to all voices and giving special attention to the ones with less limelight.

CH: Yes, of course. For me, I hold a role of privilege. I shouldn't just be looking at how to raise the voices of immigrants, but also the voices of all people of color and those that are “other” around me. We’re all part of this broader community.