In this Opportunity Makers interview, Knotch CEO Anda Gansca and Knotch’s Head of People Garrison Gibbons connect with Brad Jakeman, Co-Founder of Rethink Food & Senior Advisor at Boston Consulting Group. Brad discusses with Anda his move from Australia to New York City, the different layers of identity that come with immigration, and how diversity can be an economic driver of success. 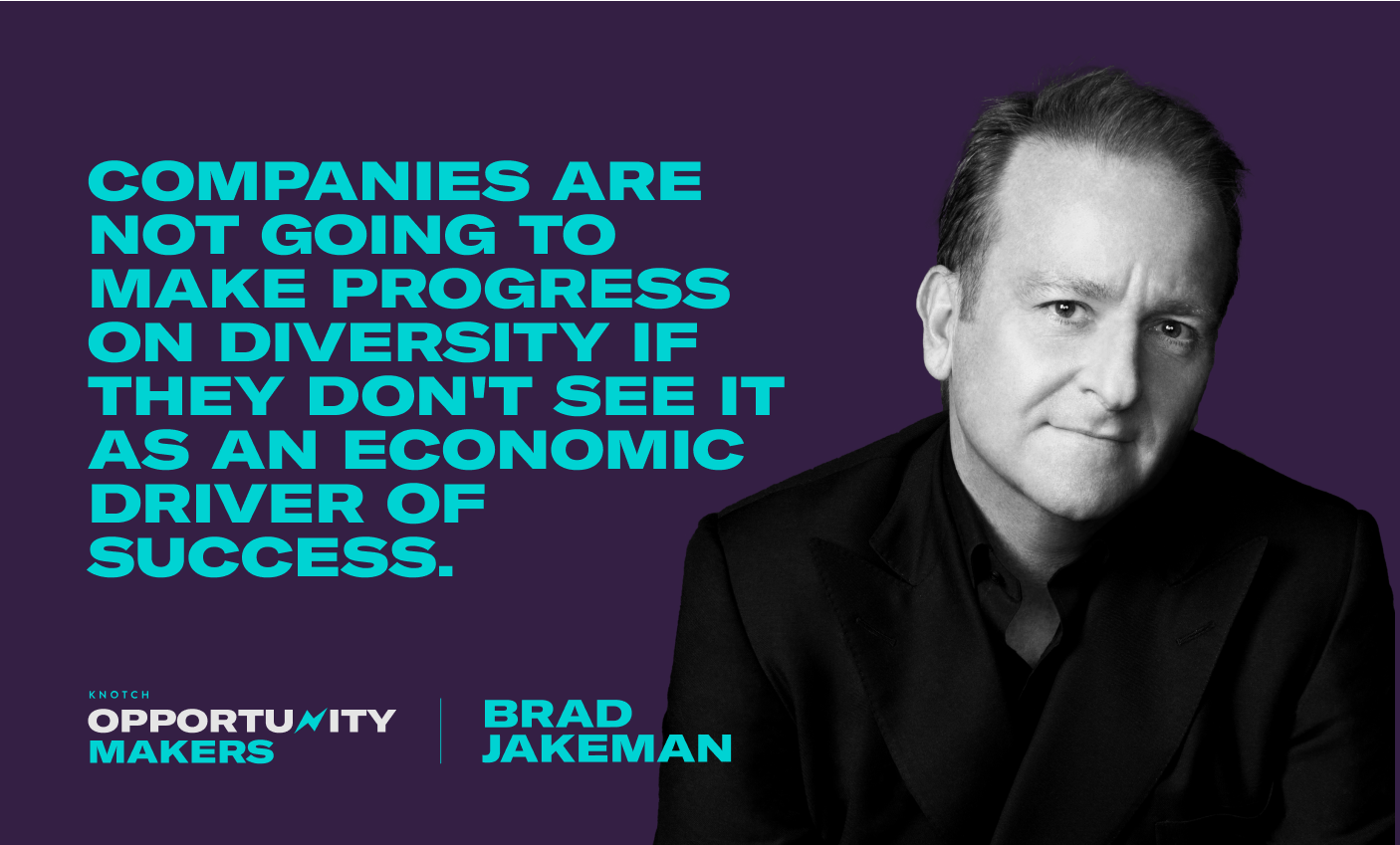 Brad Jakeman: I left Australia for 6 months, around 24 years ago. I never imagined myself living overseas, but I wanted to gain the international experience that my more senior colleagues had. Ogilvy gave me the choice between London and New York.

I found New York too busy, too scary. Instead I chose London because it’s culturally very similar to Australia in many ways. Funny enough, when I arrived in London, I didn’t know a single person there. After living in London and commuting to New York each week,  I finally made the move to New York, and I've now been here for 24 years.

Garrison Gibbons: Were there any surprising adjustments that you experienced coming to America from London and Australia?

BJ: When you come from a predominantly white western country like the UK or Australia, everything looks similar, but everything is also so different, including humor, phrases, and of course, accents.

When you immigrate to a country, you tend to form friendships very quickly with fellow immigrants. I found that my experience moving here was meaningfully different from those of my Black, Brown, and Asian friends. It's really shocking when you have those shared experiences.

AG: What do you think of the relationship between immigration and diversity?

BJ: Diversity is a critical component to innovation. A problem solved by people of the same gender, skin color, educational background, and socioeconomic background is not understood nearly as well as by a group of people with different backgrounds and life experiences.

Studies always show that diverse teams deliver better results than homogeneous teams. I’ve worked predominantly in very diverse companies, and as a business leader and immigrant myself, I’ve witnessed firsthand what these teams can accomplish.

GG: What unique values do immigrants bring to the workplace and to overall diversity of thought within an organization?

BJ: As an immigrant, I started out as non-American. Also, as a gay man, my community has historically suffered prejudice and discrimination. I don’t buy into the status quo, because I’ve actually never been the status quo. When you are outside of a world that was built by and for white, straight men to prosper, you can see the fault lines. Yet you can also make a unique contribution because you aren’t a part of that status quo.

GG: As a queer person myself, oftentimes that identity is invisible to the naked eye, as is being an immigrant. But ultimately, everyone has layers. How have you dealt with authenticity within your organization and ensuring people understand everyone’s full identity?

BJ: I’m in a privileged position as an immigrant and gay man that these identities don't present themselves immediately versus my other friends who read as diverse. From the moment they walk into the room, they're treated differently. When you don't present in an obvious way, you're welcomed much more quickly. By the time people get to understand what makes you different, they've already accepted you. And so those things are not necessarily as big barriers as they could be.

If you're in this country, you are already enjoying extreme privilege. If you happen to be white and in a university setting, you enjoy another level of privilege. Same goes with being a male, and straight. If you are one of those people, really think about how you can leverage your privilege to make society better as opposed to just making society more diverse. Everything you have was given to you straight off the bat. It’s really about using your privilege for good.

GG: What unique perspective do immigrants bring to the table? On the other side, what misconceptions might people have about immigrants that you find untrue or unfounded?‍

BJ: This country was founded by immigrants. Immigrants were for a long time viewed as the backbone of the country, bringing new ideas and mindsets. Unfortunately, over the last 20 years, we’ve seen an asymmetrical distribution of wealth coming from the significant advancements in our economy. A very small group of people are getting extremely wealthy, while the vast majority stay the same, or become worse off. It can leave you scratching your head on how that could possibly happen.

As humans, when we're faced with a complicated problem we gravitate towards a simple answer. And politically, people pointed at immigrants, because it's always easier to demonize those who don’t look like you. Over time that can be very dangerous for our country, because immigration is critically important to continue our country’s growth.

BJ:Companies are not going to make progress on diversity if they don't see it as an economic driver of success.

Companies do things to be good corporate citizens, no doubt about it. However, most companies do things out of inspiration when it really drives economic performance. And countless studies show that more diverse teams create better outcomes.

This isn’t about just being great corporate citizens. This is actually about forming effective teams that yield better results. When you start from that premise, you can embrace the cost implications in the same way you look at investing in opportunities to grow your business.

Diversity and inclusion are often used interchangeably, but I once heard the phrase, "Diversity is asking someone to go to prom with you - inclusion is asking them to dance."

As humans, we’re hardwired to feel more comfortable with people similar to us.  Companies try to make people feel comfortable in the office, yet an element of discomfort is healthy. Building teams that make you uncomfortable rather than comfortable, could be a sign that you're building more diverse and effective teams. When it comes to the sheer cost and difficulty of hiring immigrants, I think that’s a political dynamic affected by whatever administration is in the White House.

GG: The way immigrants are viewed is heavily related to the political landscape of the day. What would your recommendation be for how immigrants can be celebrated and how to depoliticize immigration to instead focus on the value add that immigrants offer?

BJ: I think sadly the idea that immigrants are here to take, not to give, has been very deeply ingrained in the operating systems of many by the few. And that's going to take a while to change. Hopefully it doesn't become the mainstream view, and we’ll continue to see case studies of immigrants who are actually making the country better.

National Immigration Day should be 365 days a year, where we internalize the significant contributions that immigrants have made to our country and to our society. Now more than ever, this celebration should extend well beyond once a year.